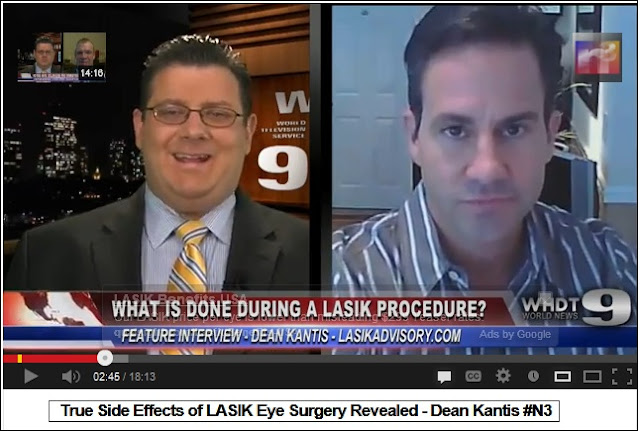 PLEASE WATCH THIS NEWS STORY ON THE DANGERS OF EVERY LASIK EYE SURGERY RESHAPING PROCEDURE THAT JUST AIRED ON WHDT TV ON 5/21/2013:
(An audience of 8 million viewers in South Florida and Boston, MA)
http://www.youtube.com/watch?v=lXzqwzQo0Oc&feature=youtu.be
OR SIMPLY CLICK "PLAY BUTTON" BELOW:
Published on May 23, 2013
Lasik surgery is advertised as a nearly miraculous surgical method of vision correction. It has been estimated that since Lasik became widely available in the late 1990s, nearly three quarters of a million patients have undergone the laser eye surgery. However, many thousands of those patients have experienced serious complications, ranging from blurred vision to blindness. Some in despair have been driven to suicide.

Dean Andrew Kantis, creator of the website www.LifeAfterLasik.com , is among the thousands of Lasik patients who have suffered life-altering complications. In testimony before the Food and Drug Administration, Kantis explained that as a result of the surgery, "I see double vision, halos, starbursts, [experience] fluctuating vision [and] dry eye syndrome." Yet he was told that his procedure was successful.

Is Lasik surgery a blessing, or a curse? How many patients have seen their quality of life adversely affected by what they had been told was a safe and effective vision restoration treatment? What are the risks of Lasik surgery -- and is the public adequately informed of those risks? Dean Kantis joins us today to discuss these important questions.

About: Next News Network's WHDT World News Program airs daily at 6pm and 11pm Eastern on Comcast, DirecTV and Over-the-Air and Online at http://usmediavault.com/WHDT.html