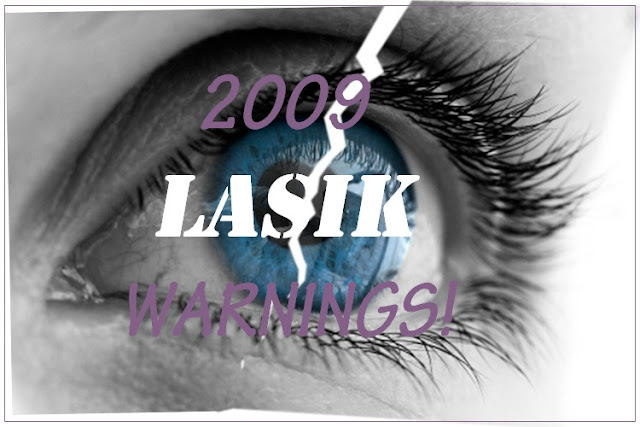 December 12th, 2009:  Tiger Woods Other LASIK Secrets That He Doesn't Want You To Know About:
http://www.lasikcomplications.com/tiger-woods.htm

December 2nd, 2009:  Federal Trade Commission Issues "LASIK Warning" To Consumers About Risks And Urges Consumers To Turn In Any LASIK Physician or Clinic That Does Not State All Known Risks In Their LASIK Ads:
http://www2.ftc.gov/opa/2003/03/lasikads.shtm
http://www.ftc.gov/bcp/edu/pubs/consumer/health/hea04.pdf

November 19th, 2009: Houston Chronicle Reports:  "FDA Taking A Serious Look Into The Estimated 75,000 Permanently Injured LASIK Patients Every Year, And Is Very Concerned About This Becoming An Epidemic:"
http://www.chron.com/disp/story.mpl/health/6727429.html

October 27th, 2009:  Be very careful of the following (17) LASIK Centers/Doctors at these facilities accused of violating major FDA Laws and Guidance's, which could be potentially dangerous to their LASIK patients:
http://www.fda.gov/ICECI/EnforcementActions/WarningLetters/default.htm#recent

October 22nd, 2009:  FDA is asking consumers to report any LASIK doctor advertising without listing "All KNOWN RISKS:"
http://www.fda.gov/ForConsumers/ConsumerUpdates/ucm187351.htm October 21st, 2009:  LA Times: "As many as 75,000 a year -- are thought to have lasting post-operative problems from having had elective LASIK surgery that include painful dry-eye, poorer vision, halos, glare, blindness:"
http://www.latimes.com/features/health/la-he-lasik19-2009oct19,0,2074207.story

October 20th, 2009:  LifeAfterLasik Asks Dr. Sharstein/Dr. Hamburg at "FDA" To Involve The Hurt LASIK Advocacy Group Efforts In Being A Part of The "Quality of Life Post LASIK Study" To Make Sure The Study Isn't Fabricated To Skew Satisfaction Rates:
http://lifeafterlasik.com/LASIK%20FDA%20Hamburg%20Sharfstein%20ltr%20Oct%2020%202009%20PDF.pdf

October 20th, 2009:  LifeAfterLasik Asks NEI "National Eye Institute" To Involve The Hurt LASIK Advocacy Group Efforts In Being  A Part of The "Quality of Life Post LASIK Study" To Make Sure The Study Isn't Fabricated To Skew Satisfaction Rates:
http://lifeafterlasik.com/LASIK%20NEI%20ltr%20Oct%2019%202009%20PDF.pdf

October 5th, 2009:  Look at the initial "LASIK Clinical Study" and notice how many flaws there were and how uncomfortable many of these Ophthalmologists felt about approving LASIK when there were already a bunch of permanent problems in these studies:
http://www.fda.gov/ohrms/dockets/AC/99/transcpt/3528t1.rtf

Click below to read my notes on this 300 page study, and why I think everyone thinking of LASIK should take time to read this:
http://www.lifeafterlasik.com/fdaoriginalclinicalstudy.htm

September 17th, 2009:  Thousands Of Hurt LASIK Patient's Stories Removed Off Of The FDA's Website:   Why Would The FDA NOT Want The Public To See These Stories?
http://www.lifeafterlasik.com/patients.htm

September 16th, 2009:  Ex-FDA Attorney Tells FDA They Are In Violation For Not Enforcing The MDR regulation, 21 C.F.R. Part 803, requiring maintenance of and adherence to documented procedures in order to implement these requirements. ALL LASIK Ambulatory Surgical Facilities (ASFs) must comply with these requirements, because failure to do so is a violation of law.  More scrutiny and possible Criminal Investigations into the new FDA Commissioner for continuing to ignore this:
www.lifeafterlasik.com/pilot.htm .

September 8th, 2009:  In yet another setback for CDRH, the Center’s former chief of LASIK device reviews tells us the agency “screwed up” in failing to set standards adverse event limits for the procedure, due to a lack of in-house expertise and added pressure from the industry:  http://www.lifeafterlasik.com/waxler.htm  or  http://www.fdaweb.com 9/8/09 News Page.

July 5th, 2009:  Chicago Tribune:  Dr. Nicholas Caro and Saint George Vision, Chicago, IL, sited by the Chicago Tribune for “gross medical negligence” having accumulated 50+ LASIK Lawsuits and counting but having received NO DISCIPLINARY ACTION  by the Dept. of Regulation.  Why is the Dept. of Regulation protecting Dr. Caro?…
http://www.chicagotribune.com/features/lifestyle/chi-bad-eye-doctor-bd05-jul05,0,4426814.story?page=1

June 27th, 2009:  FDA Is Sent Letter Asking Why They Put A Medwatch Alert Out on Zicam Cold Products Because They Were Linked To Loss of Smell And Loss of Quality Of Life, Yet The FDA Ignores Hurt LASIK Patients Wanting LASIK MORATORIUM For Loss of Eyesight, Loss of Quality of Life From Elective LASIK Surgery:
http://www.lasiknewswire.com/2009/07/open-letter-to-director-timothy-ulatowski.html

June 11th, 2009:  Letter Goes Out To President Obama Asking For A Moratorium On LASIK:
http://www.lifeafterlasik.com/obama.htm

Nov. 2008:  Is The FDA and CDRH Purposely Deceiving America About The Risks Of LASIK:
http://www.devicelink.com/mddi/archive/08/11/006.html

June 1st, 2009:  Has The FDA/CDRH Responded Yet To Your "HURT LASIK PATIENT Medwatch/Maude Complaint?"  If NOT, Send Them An Internal Email Here Telling Them You Are Upset Because You Havent' Heard Anything:
http://www.accessdata.fda.gov/scripts/cdrh/cfdocs/cfDSMA/dsma-form.cfm

May 22nd, 2009:  FDANewsAlert:  More Problems & Complications With LASIK Being Learned:
Original Clinical Studies May Indeed Be Flawed...Maybe Even Falsified!!
http://www.fdanewsalert.com/id576.html

(The FDA took down the letter that was originally here:  http://www.fda.gov/cdrh/lasik/letter-052209.html )

May 21st, 2009:  Letter sent to 200 Congressmen/women to put an immediate MORATORIUM on LASIK:
http://www.lasiknewswire.com/2009/05/letter-to-congress-seeking-moratorium-on-lasik-devices.html

May 15th, 2008:  Petition filed to put an IMMEDIATE MORATORIUM on ALL LASIK DEVICES:
http://www.lasikcomplications.com/Citizen-Petition-to-Ban-Lasik.pdf

Does the LASIK FLAP ever heal?  Answer: NO, it does not according to Dr. Lloyd:
http://www.medicinenet.com/script/main/art.asp?articlekey=54474

May 20th, 2009:  Patients by the train loads, are becoming more upset with their LASIK doctors:
http://www.lasikcomplications.com/PatientSatisfaction.html

May 16th, 2009: Father of professional baseball player, Brian McCann,
concerned with his son's mental state due to vision problems after LASIK: http://www.ajc.com/sports/content/sports/braves/stories/2009/05/16/braves_brian_mccann_glasses.html

Did Army Surgeon, Scott Barnes, give a misleading testimony at the Emergency FDA LASIK hearing?
http://www.lasikcomplications.com/lasik-prk-refractive-surgery-in-the-military.html

April 4th, 2009:  Letter To President Obama about the ongoing corruption at the FDA regarding Dr. Daniel Schultz...
http://finance.senate.gov/press/Gpress/2009/prg040209a.pdf

Saturday April 25th 2009 Marks the "One Year Anniversary" of the Emergency FDA Hearings on LASIK  What has been accomplished since those hearings to inform the public about the true nature of...
http://www.ireport.com/docs/DOC-248496?ref=email

Posted by LASIK ADVISORY at 4:46 PM