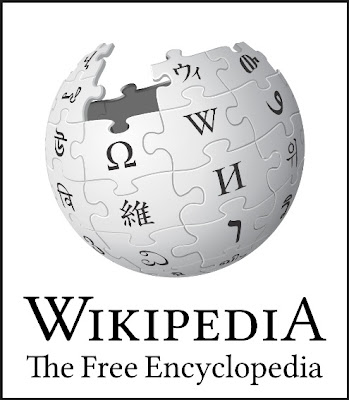 WIKIPEDIA LASIK MEDICAL COVER UP...
"CENSORING LASIK DATA...DELETING ANY NEGATIVE REFERENCE THAT EXPOSES LASIK BEING UNSAFE!"
It appears that Wikipedia.org is allowing the LASIK INDUSTRY to "censor" the following LASIK Wikipedia.org page (s):

What's really sick though, is they are "re-writing" a new history in place of the actual factual history!    Yet any and all LASIK Refractive Surgeons are stated as "Wiki Notable" people for what they are doing and contributing to the world?  Really?  Ruining someone's eye's ability to produce tear film, lying that the flap they create is temporary and heals when they've always known it doesn't and can come dislodged at any moment, knowing that every eye they do this needless elective procedure on will regress each year, and the fact that they are creating "eye disease" with the laser blasts which will accelerate the need for Cataract Surgery is notable????

Is Wikipedia really "Notable" or is it a "Censored Data" website trying to rewrite history the way those "Contributing Money" to the top Wiki-Master-Programmers wish history to be written?  Take a look at this and decide for yourself, who really funds Wikipedia:
http://www.conservapedia.com/Examples_of_Bias_in_Wikipedia

It has been told to me "over and over and over," that so many grown men and grown women, working from Mommy and Daddy's basement or spare bedroom, or working from the loft above the garage, are the real "Wiki Masters" that are paid anything to write an article or delete an article.  They play God in thinking that they are all so powerful, when they really are not even able to escape the boundries of their parents and can't even afford to go out into the real world, get a real job, make their own stake in the world, and how can I say this nicely...GROW UP!

In other words, anyone or anything, that speaks against this very profitable, multi-billion dollar profitable LASIK procedure, finds themselves eventually sued, defamed, or "deleted off of the actual history books" and instead "history is re-written" to the way "the LASIK industry wants it shown," and "not the way it really is!"  The LASIK industry has paid off these "Wiki-Master-Article-Writers" to make sure to police the Wikipedia website and censor it so that nothing too negative hurts their income stream!  Thus, be very careful with the references that cite Wikipedia...  Here's why:

First, several years ago, there was a reference given to how the ex football player, Pat Tillman died in the line of sight, being shot by a fellow military personnel who underwent LASIK and "accidentally" shot his own team member mistaken him for the opposite side, the enemy...
http://en.wikipedia.org/wiki/Pat_Tillman

(Notice absolutely ZERO reference made to any connection to the fellow military personnel who just had refractive surgery, seeing blurry/fuzzy, and thus shooting his own teamate ruling his death as caused by "friendly fire...").  Please read on:

Unfortunately, to date, the tv news anchors and media have "yet to report this true story."  That was then erased from the above link and is now nowhere to be found.
http://greenfertility.blogspot.com/2006/11/lasik-and-death-of-pat-tillman.html 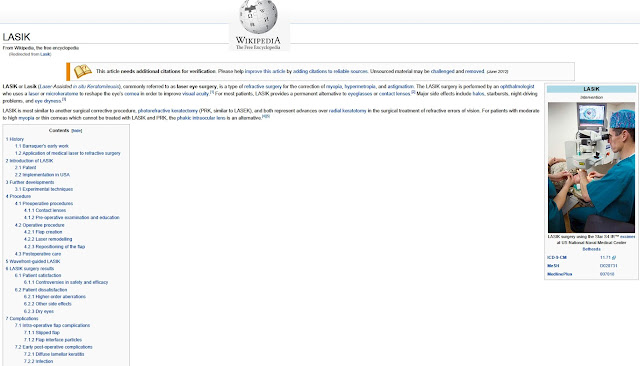 Secondly, anytime anyone speaks out against LASIK are quickly quieted and ignored.  Whether it be the man himself who approved it at the FDA, ex chief of Medical Devices, Dr. Morris Waxler, who is now "Opposed" to LASIK saying that he wants a "Criminal Investigation" into those that "tricked him" into approving it, lied about the safety studies, and continue to "FFF" "Falsify-Fabricate-Fraudulent" cook these studies even in the year 2013!

Third, anytime anyone tried to upload the various website references to give the online public a source of references, these website references have been permanently deleted and thus, the public never sees the "bad side" of what it's like to live with permanent and debilitating post LASIK eye injuries that these websites and books expose:
http://lasikadvisory.blogspot.com/2013/03/lasik-patient-websites-warning-you.html

Nor were any of us who spoke out at the April 25th, 2008 Emergency LASIK Ophthalmic Device Panel Discussion in DC allowed to post our true events/stories as Wikipedia.org "BLOCKED" every attempt at this.  Here are those public testimonies here:

Lastly, when anyone makes an attempt to "update this page" with factual data such as this or any of the references, scientific studies, and professional opions that "speak out against this electively permanent eye reshaping surgical procedure," it's immediately deleted and "gone forever."  So, anyone must reach the hypothesis that this is now a "censored pro biased LASIK website page."  In other words, "if you doubt this to be true...we challenge you to add anything that shows the negative to LASIK...and see for yourself!"

The next question is, if "Wikipedia.org is doing this for the LASIK industry, then what else are they censoring and who is paying them off to censor these pages?"  And...what is it going to take to get Wikipedia.org to "come clean" and actually give and report "the entire story" and not "censor" all of their information?  Maybe, we need to send Wikipedia.org a legal affidavit to sign stating how much ASCRS and other pro LASIK and biased  medical groups are contributing to this "paid for news encyclopedia!"

Dr. Morris Waxler, for having spoken out against LASIK and who is a notable figure as he approved LASIK and is now against it calling for a Criminal Investigation, is now finding his own Wikipedia article up for "deletion" shown here:

This article is being considered for deletion in accordance with Wikipedia's deletion policy.  Please share your thoughts on the matter at this article's entry on the Articles for deletion page.
Feel free to edit the article, but the article must not be blanked, and this notice must not be removed, until the discussion is closed. For more information, particularly on merging or moving the article during the discussion, read the Guide to deletion.%5B%5BWikipedia%3AArticles+for+deletion%2FMorris+Waxler%5D%5DAFD

From Wikipedia, the free encyclopedia
Jump to: navigation, search
Morris Waxler is the former U.S. Food and Drug Administration official in charge of approving laser vision correction (LASIK) devices between 1996-2000.[1] He is the founder and president of Waxler Regulatory Consultancy, LLC.[2]
Waxler has worked with more than 60 companies to get products approved by the FDA.[3]

Waxler holds a doctorate degree in psychology from the University of Maryland.[3]

Waxler joined Center for Devices and Radiologial Health (CDRH) in 1974 and studied the effects of light and ultraviolet radiation on the eyes of experimental animals. He worked there till 1992 and facilitated communication within CDRH on the biological effects of optical radiation.[4] From 1992 to 1996, he worked as an Interdisciplinary Scientist at the FDA's Diagnostic & Surgical Devices Branch, Division of Ophthalmic Devices.

Waxler founded Waxler Regulatory Consultancy LLC in 2008.[2]
He has also worked on projects that included body composition analyzers such as MRI equipment, breast implants and treatments for seasonal depression.[3]

Prior to working for the FDA, Waxler was a research psychologist with the U.S. Navy Medical Research Institute and a consultant for the National Institute of Mental Health.[3]

On 25 February 2010, Morris Waxler, former Food and Drug Administration (FDA) official in charge of approving laser vision correction (LASIK) devices, stated concerns about the risk of serious side-effects from LASIK and the original FDA approval process. His concerns about the safety of LASIK were discussed in an interview on Good Morning America.[5] On 6 January 2011, Waxler requested that,


"the Commissioner of Food and Drugs withdraw FDA approval (PMA) for all LASIK devices and issue a Public Health Advisory with a voluntary recall of LASIK devices in an effort to stop the epidemic of permanent eye injury caused by lasers and microkeratomes used for LASIK eye surgery."


"The FDA was deprived of knowledge of the full extent of LASIK injuries prior to and during FDA reviews of documents submitted in support of the safety and effectiveness of LASIK devices under 21 CFR 812 and 21 CFR 814. In addition, LASIK manufacturers and their collaborators withheld safety and effectiveness information from their investigational device exemption (IDE) reports to the FDA. In addition, they hid LASIK injuries from FDA within the context of out-of-court settlement of innumerable lawsuits. Clinic-sponsored IDE studies cherry-picked, withheld, and hid data from FDA that clearly showed LASIK with excessive adverse event rates (greater than 1%). These activities were an industry-wide effort, organized wholly or in part by the manufacturers and their collaborators in order to circumvent FDA law and regulation. I will submit confidential information on these matters separately to FDA’s Office of Criminal Investigation."[6]

In an interview with CNN in 2011, Waxler stated that the failure rate, based on FDA data, is over 50%, 18% or more people suffer from glare, halos, dry eyes and similar problems and around 0.7%-1% have problem with corneas so thin that they bulge. He stated that problems such as haze, halos and night driving problems are persistent and they remain after a year. He said that,


"I was wrong to discount the haze, halos and other effects. These have not been studied extensively and when they are studied, they are studied by people who have financial interest in the outcome and no independent studies have been done."[7]