﻿
-LASIK PATIENT INFORMATION BOOKLET (PIB)-
"First, by FDA and Consumer Laws, every LASIK AMBULATORY FACILITY (ASF) operating legally in the United States of America, is supposed to provide the PIB's to every potential LASIK patient so they have informed consent, which is giving the prospective patient(s) all known risks and known long-term injuries involved with this elective-irreversible eye reshaping surgery. READ EVERY PAGE...IT WARNS OF PERMANENT DAMAGES!"


BUT..WHERE ARE THE POST LASIK PICTURES...
SHOWING THE PROBLEMS THAT CAN'T BE CURED AFTER UNGOING LASIK...LIKE THESE:

Lasik Enhancement surgery Hundreds of thousands of patients had lasik enhancement surgery in usa, but fda still doesn't know if it's safe or not. Many lasik doctor's call 'touch up' to enhancement surgery because it's easier to sell lasik. Many lasik centers advertise lifetime commitment  It's illegal to advertise a procedure that the fda still don't know if it's safe or not. The biggest laser center in north america advertise lifetime commitement for more than 15 years.
http://www.fda.gov/MedicalDevices/ProductsandMedicalProcedures/SurgeryandLifeSupport/LASIK/ucm061270.htm

"It is also important to note that no laser company has presented enough evidence for the FDA to make conclusions about the safety or effectiveness of enhancement surgery." Many lasik doctors at the first consultation say "there is a % of needing a touch up". Touch up looks much simple than second surgery. It´s easier to sell lasik this way.  Lasik doctors say bad results happen with old lasers, but 'old' lasers are still approved by the FDA. The FDA still consider these safe Those lasik doctors who say "bad results happen with old lasers" did many lasik surgeries with those "old" lasers, not informing patients about the problems "complications" they now admit. It´s always the same thing. In the year 1998 they said the same thing "bad results happen with old lasers", in 2000 the same, in 2002....... and now in 2013.  Some naval aviators hide laser eye surgery complications..."
http://www.airwarriors.com/community/index.php?threads/starbursting-after-prk.30543/

"Don't tell anyone. Wait awhile." "Starbursts will keep you from getting the waiver, and as I was told, they will forever be in your med history, whether or not you still have them, and can permanently DQ you..." "I'm 2+ years out and still have them. All I can say is you can get used to them to where they don't affect your performance. So just sssssssssssshhhhhhhhhhhhhh."
http://www.airwarriors.com/community/index.php?threads/starbursts-after-one-year.23107/

"Be careful what information you give MEPS or any other military doctor. They often will make a big deal out of nothing and put you through several tests and delays. I've seen it happen to several buddies. Ask yourself this - just how bad is your condition? Can you drive safely at night? Do you believe that you could fly safely at night the way you are? If the answer is no, then get checked out immediately, otherwise let sleeping lions lie."

"Remember the saying You should keep your mouth shut and let everyone think you are an idiot rather than opening it and confirming that you are......this sort of applies here."

"Your eye problems are not detectable on any test that the Navy will run you through. Most likely, your problem stems from an issue with your pupil size and/or the blend zone that was created during surgery. Unfortunately, it probably won't improve much. If you want specifics, PM me (don't worry, I'm not a Navy doc)."

Lasik doctors hide that many doctors are against lasik.  We abandoned laser eye surgery about 4 years ago and we advise our patients against it:
http://www.cbsnews.com/2100-204_162-327664.html

"Although thousands of patients now have laser surgery every week, there is little medical research underway. That worries eye surgeon Dr. William Jory.

"The public will point their fingers at us in a few years time and say, 'Doctor, why didn't you warn me?'" says Jory."  Jory, however, has stopped using lasers in his practice in London."

"We abandoned [the] laser about 4 years ago and we advise our patients against it" says Jory." Pioneer in laser eye surgery said that he will no longer perform the procedure because it violates his medical ethnics:
http://www.chinapost.com.tw/taiwan/national/national-news/2012/02/15/331686/Surgery-pioneer.htm

"The China Post--Ray Tsai (蔡瑞芳), one of Taiwan's pioneers in laser eye surgery, said yesterday that he will no longer perform the procedure because it violates his medical ethics. In an unlikely twist, Tsai told local press yesterday that he will cease performing the LASIK procedure as it goes against his medical ethics.  He has observed situations in which visual acuity worsens suddenly and rapidly long after the LASIK procedure itself.  Such vision loss deals a huge blow to patients' careers and daily lives.  Tsai cited the case of a 45-year old woman who, ten years after receiving surgery, experienced such drastic vision loss that she is now unable to drive her children to school."
http://english.eastday.com/e/120216/u1a6366414.html

"It is against my ethics to not tell them all the possible consequences," he said, likening it to cheating in order to do more business. "After a full consideration, I decided to quit LASIK."
Eye doctor Cynthia Mackay says "lasik is a terrible idea, don't go near it"
http://www.youtube.com/watch?v=SYss7yOacHk  Watch 1.15 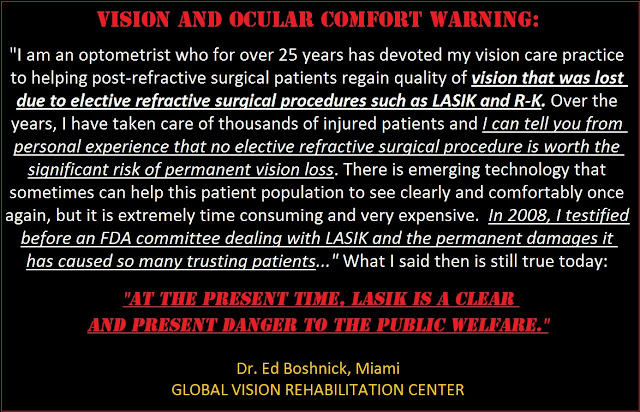 "My feeling is that lasik surgery and other refractive surgical procedures exist solely to enrich doctors and the corporations that manufacture the laser equipment and not to benefit mankind." Dr. Amanda Zeller - Optometrist O.D says:
http://www.angieslist.com/articles/lasik-success-rates-are-high-be-aware-risks.htm

"I am an optometrist, and I have seen many many patients who had bad LASIK outcomes. I cannot recommend this procedure to any patient after what I've seen in my exam chair. The rigid contact lenses required to correct corneas butchered by LASIK are complicated to fit, very expensive, and much less comfortable than most people's glasses or soft contact lenses. As a glasses-wearing myope myself, I would NEVER risk ruining my eyes with LASIK."  http://www.swellinfo.com/forum/showthread.php?18562-Lasik

"My wife is an ophthalmologist and she also has reservations about LASIK. I wear soft contacts myself and can count on one hand in the last 10+ years I've lost a contact in the water..."


"DID YOU KNOW THAT THE INVENTOR OF LASIK WEARS GLASSES?"
http://lasikcirurgia.blogspot.pt/2011/04/o-inventor-do-lasik-prof-gholam-peyman_30.html 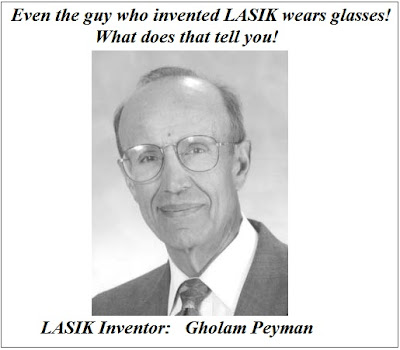 Posted by LASIK ADVISORY at 8:22 AM