Atlanta business analyst and project manager Michael Patterson asked the NIH to begin a "criminal investigation" into the conduct of the recently completed LASIK Quality of Life Collaboration Project, alleging that it presented false safety and study purpose information to over 500 subjects who underwent the LASIK procedure.

The slides of preliminary results from that study and delivered in October to the American Association of Ophthalmology by CDRH director of ophthalmic devices Malvina Eydelman showed, Patterson’s complaint says, that “severe symptoms” including loss of two lines of best corrected vision were not considered adverse events “despite the indicated impact on work productivity, coping, social desirability, depression/anxiety, severity, etc.  In addition, one of the … research investigators indicated that only serious adverse events were even reported.” 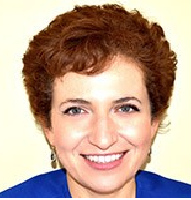 Patterson’s complaint alleges that researchers “were not concerned about the informed consent or safety of the subjects who had LASIK in the study itself. This was very unethical in my opinion and I’m asking for a formal investigation. This happened because the researchers ignored evidence that LASIK itself was not safe” as reportedby former CDRH branch chief Morris Waxler, who found a 20%-plus rate of LASIK adverse events. 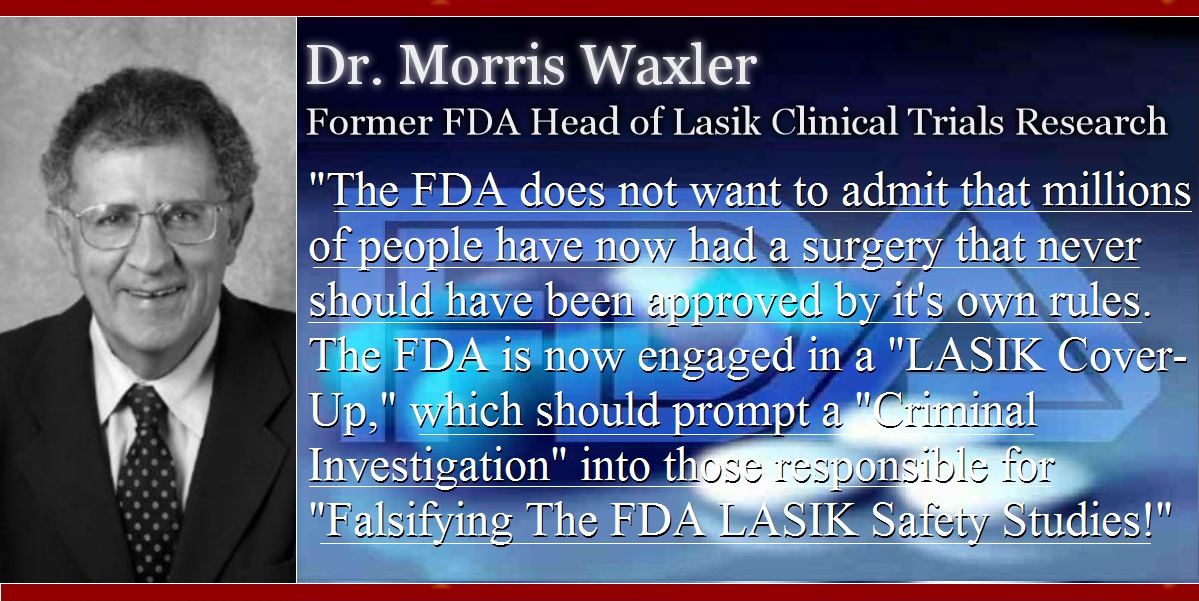 “Regarding the clinical trial informed consent,” the complaint says, “the five different research centers for the PROWL2 study (each had a separate IRB that likely did not even evaluate the ethics of the LASIK part of the study) used entirely different LASIK informed consents that do not include many of the things on the other consent forms, and are also intentionally misleading per the standard practices done by the LASIK surgeons. … There was no balance in the information they were given...

“The consent forms included in this complaint (I have them from two of the five centers from PROWL2) did not include information that the flap NEVER heals,” the complaint continues. “One of the two (why not both?) indicated the flap is weaker after LASIK but that does not give the full extent of the problem. The entire eye is weakened because the outer 1/3 is the strongest part and it loses over 97.5% of its former strength after a LASIK flap is cut. This can cause a lot of other problems. Where does the consent form indicate the lasers use UVC light (the most dangerous carcinogenic wavelength according to a 2011 W.H.O. study) that causes premature cataracts to develop?  Where were they told of the risk of retinal or vitreous problems caused by LASIK? Both consent forms implied that LASIK problems are usually temporary (and ‘rare’ in the first place), but ‘may’ be permanent. This is FALSE. The fact is that LASIK problems occur in 45% of patients (who had no symptoms before LASIK according to the PROWL2 data), are usually permanent and are only rarely temporary.”

The second injured LASIK complainant, Fort Lauderdale microjet sales broker Dean Kantis, charges in a 1/15 lengthy, illustrated complaintto the HHS Inspector General that the $1 million collaboration project “actually proved that LASIK (elective surgery, not necessary in the first place), has inflicted permanent damages into 30% or more eyes at months 3-6, post-LASIK and yet … Malvina Eydelman spun the study as if it was safer than ever. So my question to you is, “Would you fly in an airplane that crashed 1 in 3 flights?” 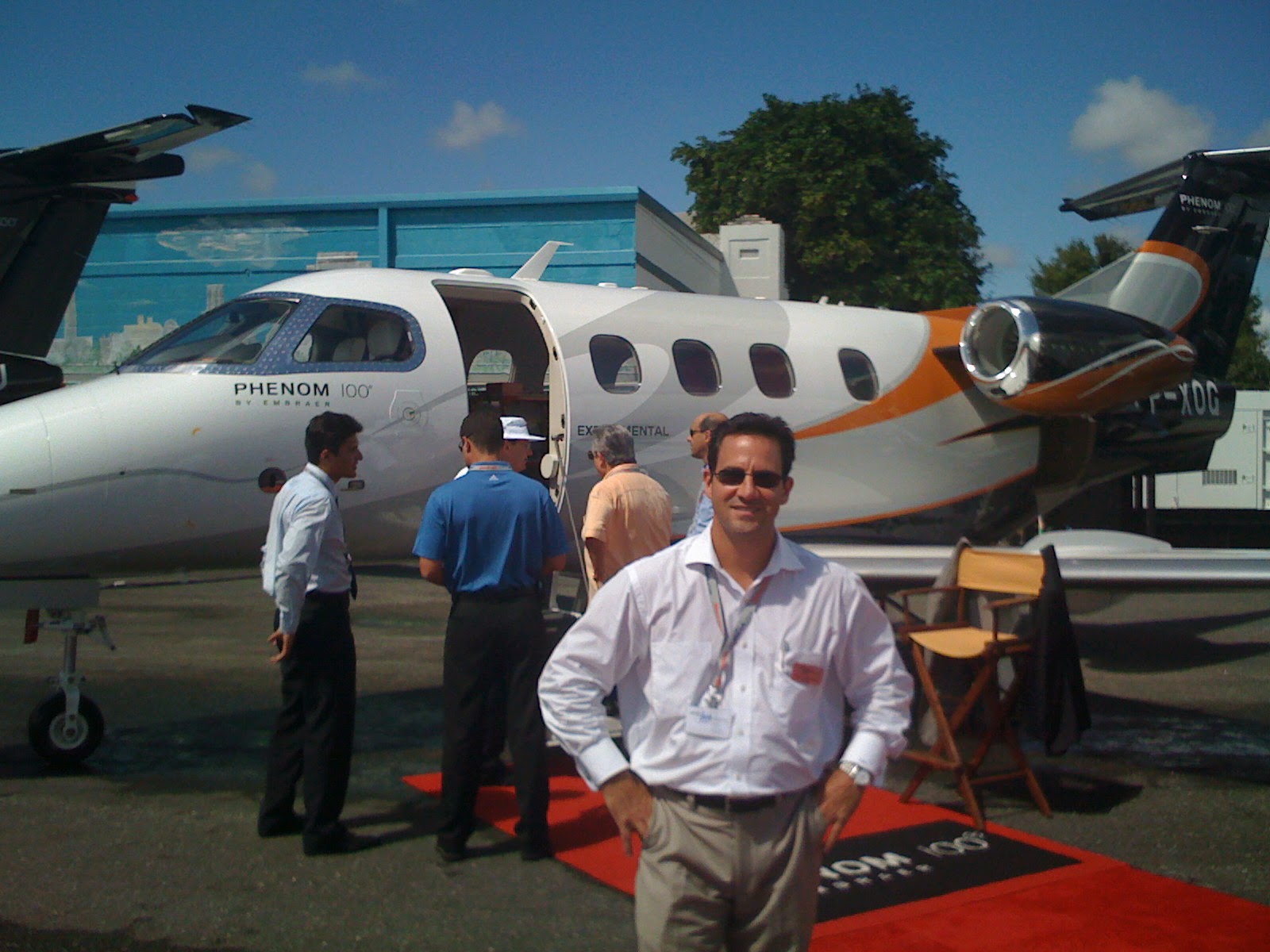 Producer of a 10-minute Youtube movie on LASIK, Kantis alleges a conflict of interest with CDRH’s Eydelman “and possibly the director of devices, Jeffrey Shuren, in showing ‘biases’ to the medical industry” by “protecting the profits, safety studies, financial interests, and reputations of physicians in and around the safety studies involved with PRK/LASIK/Refractive Surgery, and this has been going on since the 1990s …” 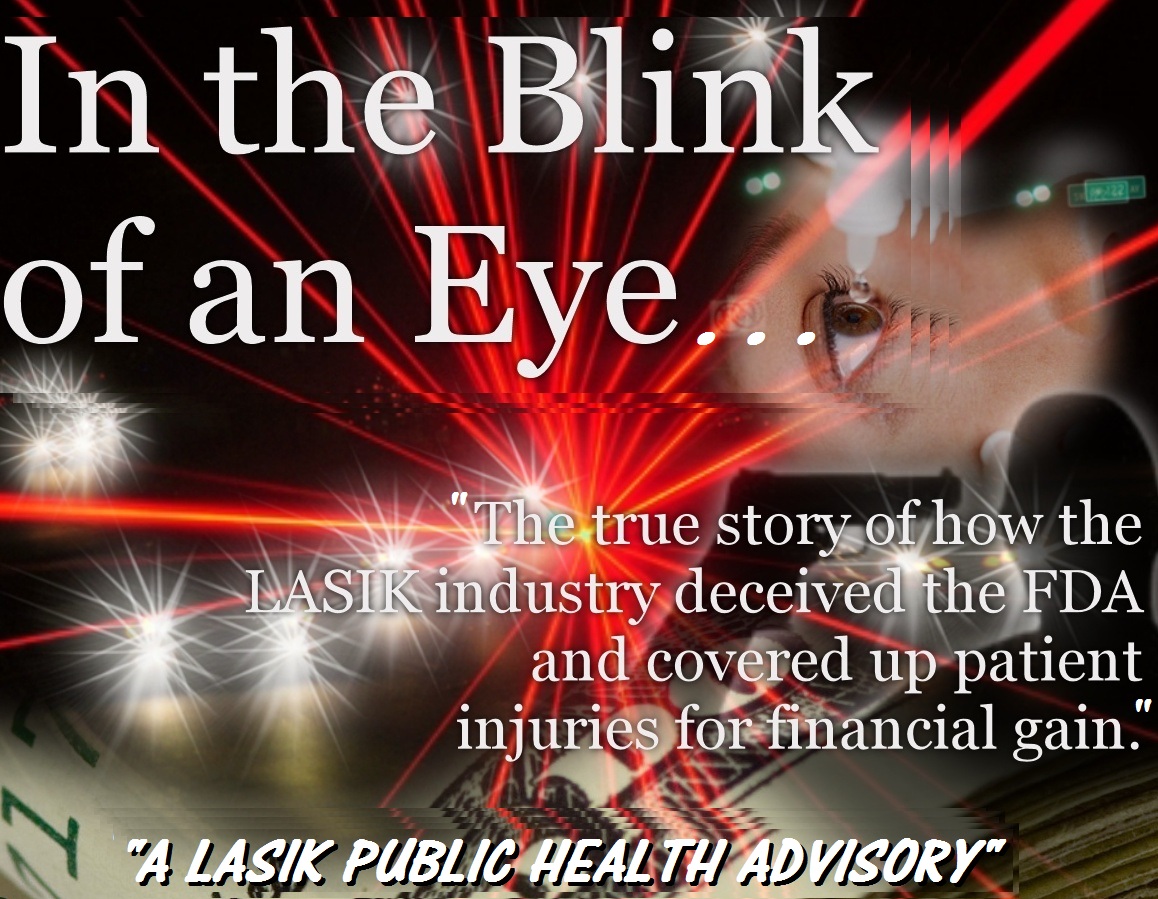 Kantis’ complaint asserts that the proof of this high LASIK adverse effects rate can be seen in any grocery or pharmacy ─ “Notice all of the post-LASIK dryness drops? … ” His complaint says there are now more than 4,000 MedWatch reports on LASIK and PRK events “and growing yearly, mostly created by injured patients, and not by their physicians, so you can imagine how much larger this number and epidemic would grow to if physicians and trained staff were reporting every ‘retreatment/enhancement,’ ‘dry eye prescriptions for Restasis,’ and ‘other visual disturbances.’ Yet, they aren’t reporting them because they know that no one is policing them ─ especially the FDA.”

In 1978, Dickinson conceived the idea upon which FDA Webview would later be based, establishing the first daily FDA news service for the pharmaceutical industry in Washington Drugwire. Ahead of its time, this was a daily single-sheet Western Union Mailgram providing between five and eight specialized news capsules each morning, based on Dickinson’s exclusive FDA sources. The service was too expensive, however, and it ceased publication the following year.   Dickinson consolidated his many journalistic activities in 1982 under an independent company he established with his wife, the former Sheila Ferguson (Ferdic is a combination of their two last names), and in 1984 they launched the twice-monthly Dickinson’s FDA, a unique analytical newsletter covering FDA regulation of pharmaceuticals, medical devices, biologics and veterinary medicines. followed by Dickinson’s Pharmacy and Dickinson’s PSAO (two pharmacy-oriented monthlies).    In 1992, the company launched Dickinson’s FDA Inspection, a monthly newsletter focusing on in-depth analysis of FDA enforcement and compliance actions, co-edited with a former FDA prescription drug labeling compliance director, Rudolf Apodaca. In 1993, this publication was merged with Dickinson’s FDA in a new monthly, Dickinson’s FDA Review, with former FDA Denver District director John Scharmann as consulting editor.  Today Dickinson continues as Editor, Publisher and President of Ferdic, Inc, which has a staff of writers, researchers and office personnel under the direction of Washington Editor David McFarland.