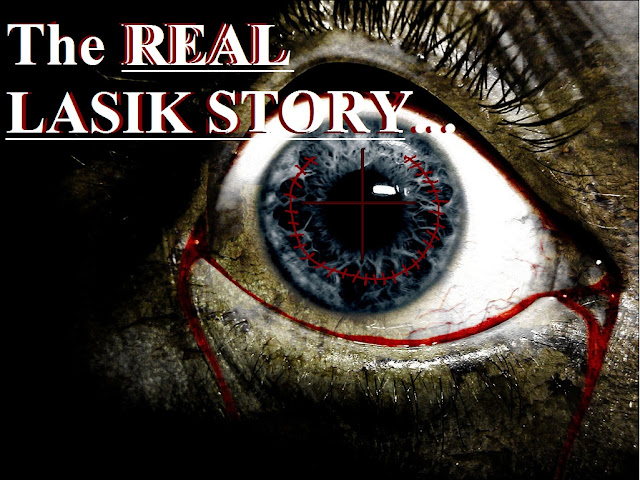 
"The producer of one national news program that did a special on Lasik told me that he's never seen anything like the way the Lasik industry has "circled the wagons" around incompetent docs, unethical Lasik mills, and deceptive advertising. Since they won't do the job of policing their own, it is left for people who have had bad experiences to do it for them." -- Joe Tye, author, speaker and CEO.


Dr. Amanda Zeller, OD: "I am an optometrist, and I have seen many many patients who had bad LASIK outcomes. I cannot recommend this procedure to any patient after what I've seen in my exam chair. The rigid contact lenses required to correct corneas butchered by LASIK are complicated to fit, very expensive, and much less comfortable than most people's glasses or soft contact lenses. As a glasses-wearing myope myself, I would NEVER risk ruining my eyes with LASIK." See comments under article


Mark Packer, MD: "If a patient is willing to take a chance, my experience has been sometimes you win and sometimes you lose." EyeWorld, March 2011.


Dr. George Waring III: "I would not be willing to take even a 1 in 500,000 risk on my eyes," Dr. Waring said. Source: Demand High for RK Eye Surgery – Critics Say Glasses, Contacts Work Best, Doctors Just Trying to Enrich Themselves by Jeffrey Weiss. Seattle Times, p.A4 7/12/93


"Ease of lifting the corneal flap 6 years after LASIK suggests that the interface remains a potential space, providing an easy conduit to the environment. We present the first reported case of Shewanella putrefaciens keratitis after LASIK and emphasize that flap-related complications can occur many years after the procedure. " (Park et al, 2007)


"Recently, the visual optical system has taken on a new clinical significance in refractive surgery, since current refractive procedures can and do induce large amounts of higher-order ocular aberration that often affects the patient’s daily visual function and quality of life." (Yang et al, 2010)


"Furthermore, if [LASIK] interface transparency is indicative of absent wound healing, one might expect that the interface remains a potential space and flap adhesion is impaired for the lifetime of the flap." Ursea R, Feng MT. Traumatic Flap Striae 6 Years After LASIK: Case Report and Literature Review. J Refract Surg. 2009 Dec 28:1-7. doi: 10.3928/1081597X-20091209-02.


Dr. Shaili Jain: “We seldom get to hear what patients want or value because in the real world disappointed patients rarely tell doctors to their face that they think of them.” Source: Docs seek to stifle patients’ rants on Web sites. By JoNel Aleccia. MSNBC.com. 1/13/2010. Accessed 1/13/2010 at http://www.msnbc.msn.com/id/34794632


More than 90 percent of our knowledge is obtained through our eyes, making vision the most valued of the senses. Source: Boston Foundation for Sight website.


Indiana Attorney General Greg Zoeller on the indictment of cataract and LASIK surgeon, Dr. Philip Gabriele, "Rarely do we encounter such a disturbing example of a trusted medical professional allegedly putting personal greed ahead of patients' health and safety." Source


Dr. Gary Conrad: "It was once believed that the flap would re-adhere permanently. However, the unique connective tissue of the cornea and a lack of blood vessels limit its ability to fully heal even years after the procedure... A trauma to the face, such as impact from an automobile air bag provides enough force to dislodge the flap, reopening the cornea, infecting it with dirt and debris, and causing instant loss of visual acuity." Source


"Would I ever get LASIK?... Being an ophthalmologist with blurry vision would handicap me. Finally, I do have dry eyes, which could get worse. I'll stick to my glasses and contacts for now." Rachel K. Sobel: 3/30/2009 Source


Dr. Edward Boshnick: "From what I have seen and witnessed in my many patients, I feel at the present time LASIK presents a significant public health crisis." FDA hearing, April 2008.


Dr. John Kanellopoulos: “There was evidence presented by Emory University’s Henry Edelhauser at this year’s Refractive Surgery Subspecialty Day at the Academy of Ophthalmology meeting that the LASIK flap never actually heals onto the underlying stroma, especially centrally... This was a real eye-opener for me..." Review of Ophthalmology 2/1/2009


Stephen S. Lane, MD: "Make sure the first patient you enroll feels like you have been doing this for years..."


Marguerite B. McDonald, MD: "I'm not the only person who thinks maybe we should hang up our microkeratomes."


Dr. Joseph Dello Russo: "Since almost 100% of LASIK patients have some degree of decreased contrast sensitivity post-operatively there is no reason to test for it preoperatively."


JULIE RALLS, M.D. Newport Beach, Calif.: "Treating myopia with corneal surgery is like treating obesity with liposuction. Corneal surgery is an elective procedure that carries the risk of serious and permanent complications. High tech may be glamorous, but it is not always the best medicine."


Lee T. Nordan, MD: "It has taken us more than half of this decade to learn the risk factors associated with a LASIK flap. Now, I believe that we should all be aware of them."


Karimian et al: "Unfortunately, because of long term complications of LASIK, such as keratectasia, this procedure is used more cautiously."


Lee Nordan: "Common aims of refractive surgery include "providing the patient with adequate distance and near functional vision while both of his eyes are open".


Dr. Stephen Slade: "LASIK, the more LASIK you do, the more trouble you run into."


Raymond Applegate OD, PhD: "We used to not pay much attention to higher order aberrations because we couldn’t fix them."


Dr. I Howard Fine, Past President of the American Society of Cataract and Refractive Surgery:  "As we all know, Lasik transects the cornea nerves, therefore inducing dry eyes in most patients."


Dr. Arthur B. Epstein: “... many of us in the contact lens community have spent untold hours trying to help patients who have had their lives literally destroyed by LASIK.” Source: Review of Optometry, November 2006


Dr. Jack Holladay: "By 1 year postoperative, he said, the patient’s brain adapts to the new way visual information is being delivered to it, and patients who were at first unhappy become more contented." It is vital to perform bilateral implantation of multifocal lenses in order to allow the neural adaptation to take place, Dr. Holladay said. Always implant multifocals in both eyes,” he said. “By 6 to 9 months, the neural adaptation will kick in, and the amount of unhappy patients will dwindle down to less than 1% or 2%.”


Schallhorn et al: "At the very least, adequate counseling for quality-of-vision risks should be provided to patients with large pupils that will be treated with a 6.0 mm optical zone."


Marguerite McDonald, MD: "With LASIK, roughly half of my patients had dry eye complaints after surgery-and in about half of these, the symptoms were severe."


Mantry S, Shah S.: "Indeed, the long-term problems created by laser refractive surgery are not yet a major issue, but soon will be."


Paul Koch, MD: " 'We have lens implants that can do that,' I continue. 'Oh, I know,' the patient interrupts.' I smile, as I picture a credit card passing my way."


Michael W. Malley: "From the perspective of sheer market size and potential penetration, however, it’s hard for a refractive surgeon not to lick his chops when comparing the LASIK market to that of refractive lens exchange."


Marguerite McDonald: “I think surface ablation is appealing because your heart rate doesn’t go up when you do it, and you don’t have to deal with a [LASIK] flap.”


Ron Krueger: "Further evidence demonstrates that the brain does seem to adjust over time, even if it does take a year or two."


Richard F. Callaway, MD: “Don’t create a higher standard for yourself than you need to."


George O. Waring, MD: "Refractive surgery is surgery done by a physician, a surgeon, on a fellow human, operating on the organ through which we get 80% of our information."


"Since a large part of this rigid anterior part of the stroma is either removed (PRK) or intersected (LASIK), it is possible that in the long run patients who underwent refractive surgery may be confronted with optical problems."


Eric D. Donnenfeld, MD: "When there are large gray areas or your views are discrepant with the norm, please keep your opinion to yourself and outside of a court of law. We should not be held to today’s standards in a malpractice event that took place several years ago."
http://www.crstoday.com/PDF%20Articles/0106/CRST0106_Lawsuit.html


CLAYTON Y. GUSHIKEN, O.D. Honolulu: "As an optometrist, I am not recommending this procedure. History will teach us that the cornea is not a structure we can mess around with. The risks (e.g., current surgical mishaps and potentially devastating long-term complications) are simply not worth it."http://www.time.com/time/magazine/article/0,9171,992418,00.html


James J. Salz, MD:   "..I have heard bilateral LASIK advocates seriously state that this is one reason to do the two eyes together, so that the patient can’t compare the LASIK eye with the contact lens eye!"


Robert K. Maloney, MD: "One of the things that has been very striking to me is how my most angry patients often have pretty good results and often my patients with the worst results are relatively benign and trusting."

Shareef Mahdavi, LASIK Marketing Consultant: "What is interesting about the Baby Boomers is that they are now between the ages of 42 and 60. They are going to develop presbyopia and they are going to develop cataracts for the most part, and that is good news. The even better news is when you look at their financial situation. They are generally past their peak debt and are moving into their peak net worth in spending and investments. Thus, these are good tail-wind dynamics for you as surgeons."

http://www.osnsupersite.com/view.asp?rID=18428
Mark G. Speaker, MD: "Criticism of care from another doctor is often a trigger for a lawsuit."


Lee T. Nordan, MD: "In my experience, the odds that an eye with a corneal thickness of 500μm will develop ectasia postoperatively are a lot higher than 5%. I would estimate a risk of between 50% and 75%."


Thomas R. Quackenbush, Vision Educator: "A primary tenet of orthodox medicine has been never to perform surgery on healthy tissue. It appears this tenet has now changed. Obviously, many people have better acuity soon after these surgeries--but what about the long-term consequences?" Source: Relearning to See.