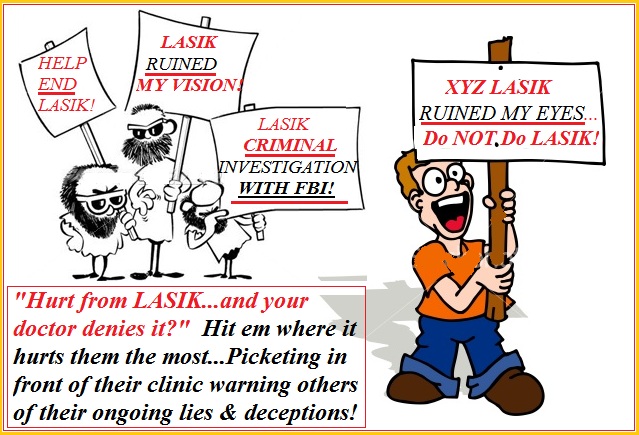 WHEN THE LASIK PHYSICIAN AND STAFF WHO RUINED YOU...DENY ANY WRONG DOING...PUSH YOU PAST THE POINT TO SUE THEM (2 YEARS USUALLY)...PERMANENTLY DAMAGED LASIK PATIENTS FIND THAT PICKETING IS OFTEN THE BEST SOLUTION FOR EVERYONE...AND IT IS! 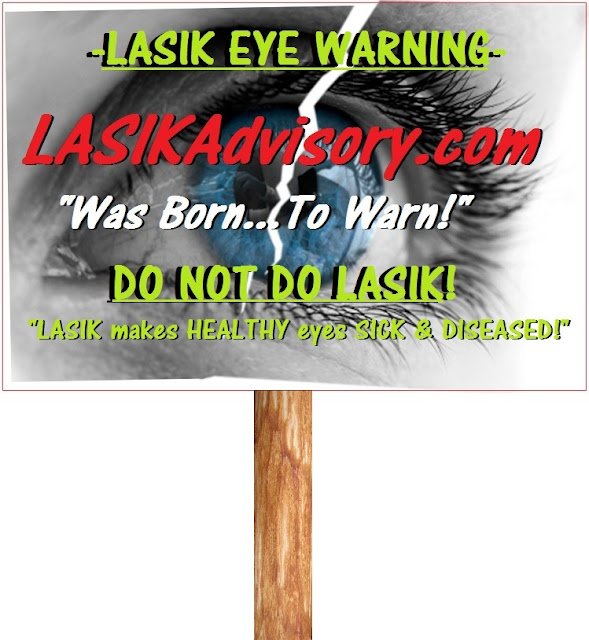 There is no cookie cutter answer in making a decision to "PICKET" in front of the very LASIK LIARS that promised "YOU'LL LOVE LASIK!"  I would say to picket for as long and as frequently as needed until the injured patient has achieved their goal. An end goal is needed though. I would recommend the first time picketing to make it a 4-6 hour effort to get the point across that you are serious. The second time is likely needed to let them know you are still serous. I would only spend 1-2 hours on the second and all following visits. Picket frequently enough to keep it fresh on their minds. Once per week at random days/times would probably work well. 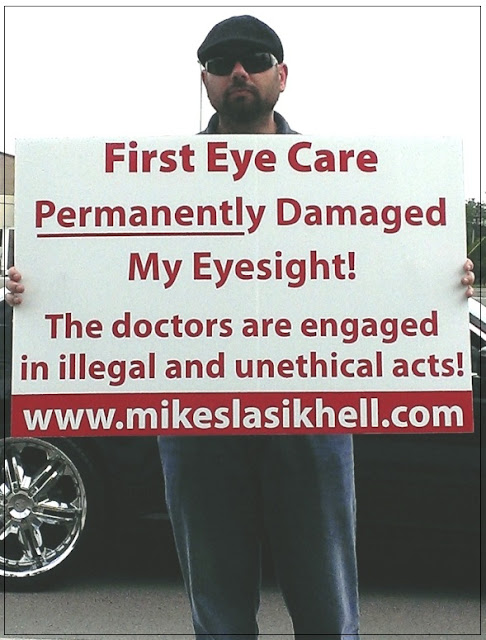 Below is a number of goals that may be applicable to many angry/revengeful patients:


-Picketing a doctor's office can force them and the public to address a patient's concerns regardless of the statute of limitations or when the procedure was performed.


-There is no cookie cutter answer to how long a patient should picket. Picket for as long and as frequently as needed until you has achieved your goal. An end goal is needed though.
-A recommended first time picketing effort could be 4-6 hours to get the point across that you are serious. The second time is likely needed to let them know you are still serious. Then only spend 1-2 hours or so on the second and all following visits. Picket frequently enough to keep it fresh on their minds. Once per week at random days/times would work well.
Below are a number of goals that may be applicable to many patients:
1) Inform the public without any expectations of a return. Just to warn the general public or a particular doctor's patients that LASIK is dangerous and that a particular doctor has injured their patients or caused undesirable side effects.
2) Picket until a particular doctor offers a monetary relief that satisfies the injured patient.  3) Picket until a particular doctor makes changes that satisfy the injured patient. This could be as simple as updating consent forms to include accurate info or as extreme no longer performing LASIK.  4) Picket until a news agency picks up on the patient's efforts and creates a story. Notifying the news agency first of your picketing effort will help.  5) Picket until you drive a dishonest doctor out of business to prevent future injuries.
6) Force change within the doctor's office that works toward the goal of eliminating LASIK and properly informing the public. Force them to be up front and honest.  7) Monetary relief for past, present, and future vision expenses, and for loss of the quality of life they stole from you. There is no amount of money that satisfies this, but you must settle at some point for an amount and it should be significant enough that the doctors will no longer take unnecessary risks with their patients.
If you drive them out of business before your goals are met, so be it. They chose to lie, cheat, and injure you. They did this to themselves.  Revenge and Avenge are great words! 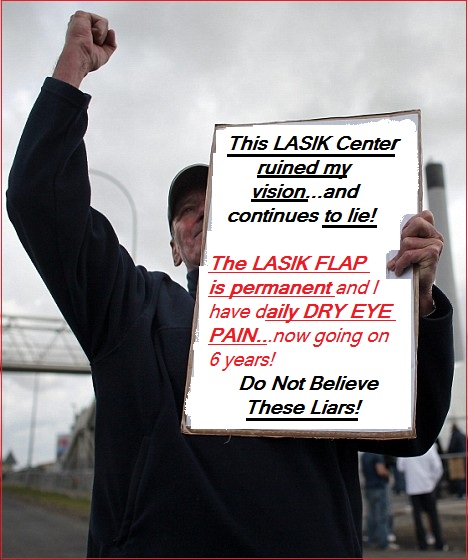 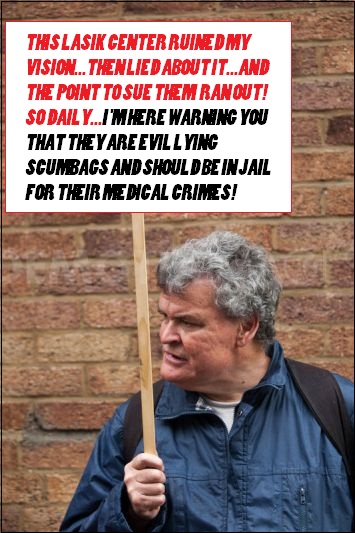 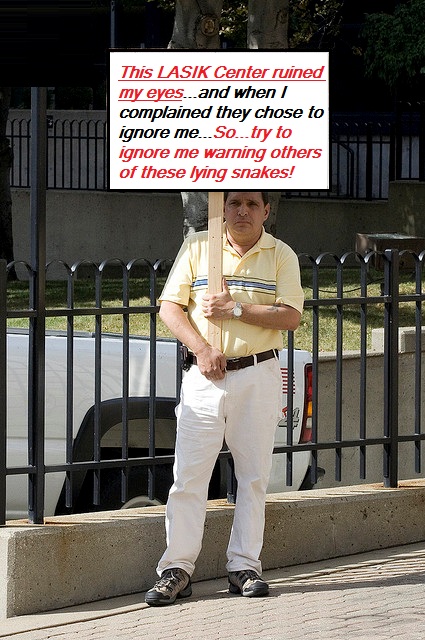 EVERYONE HAS THE RIGHT TO FREEDOM OF SPEECH AND TELLING YOUR SIDE OF WHAT REALLY HAPPENED! SO...TELL...WARN OTHERS...CARE ENOUGH TO WARN OTHERS AND PREVENT OTHERS FROM FALLING PREY TO THE LIES & DECEPTIONS! 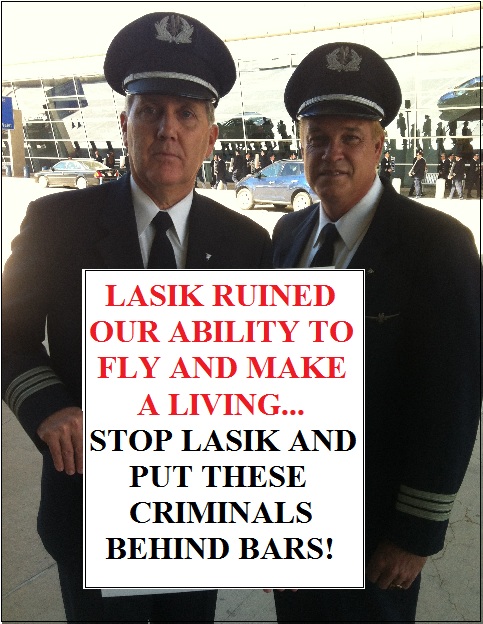 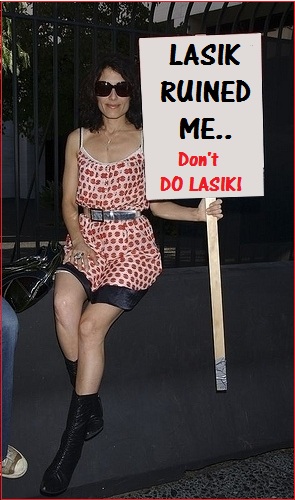 IF YOU'RE HURT FROM LASIK...AND YOU ALLOW OTHERS TO BE HURT...ISN'T THAT KIND OF LIKE KNOWING A FAMILY WILL GET ON A BUS HEADED TO AUSCHWITZ CONCENTRATION CAMP AND NOT SAYING ANYTHING TO WARN THEM...ALLOWING A FAMILY TO BE INJURED ISN'T A GOOD THING RIGHT?  SO DO SOMETHING...WARN EVERYONE YOU KNOW! 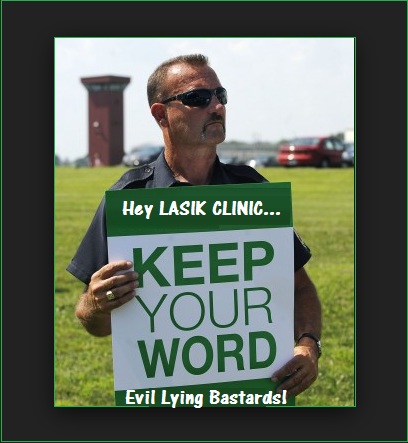 ...YET LASIK CENTERS CONTINUE TO BE ALLOWED TO USE DECEPTIVE ADVERTISING MEANS...REALLY CRIMINAL IN NATURE...AND EXPECT NO RETALIATION!  REALLY?  CLOSE TO 4,000 INJURED LASIK PATIENTS COMPLAINED TO THE FDA ... 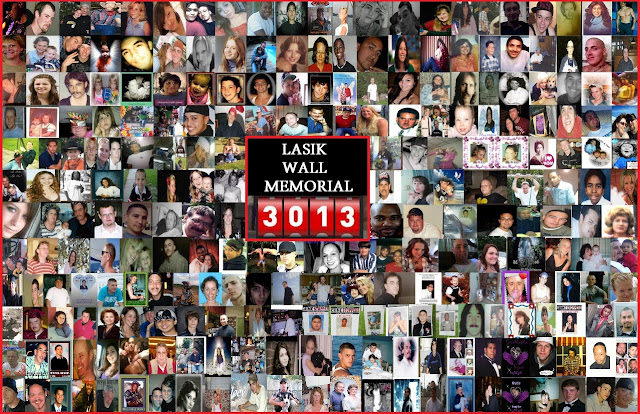 BUT...IS THE FDA DOING ANYTHING ABOUT UNSCRUPULOUS AND POSSIBLE "CRIMINAL" MEDICAL ACTS WITH LASIK CENTERS?  WHERE IS THE COMMISSIONER, MARGARET HAMBURG? 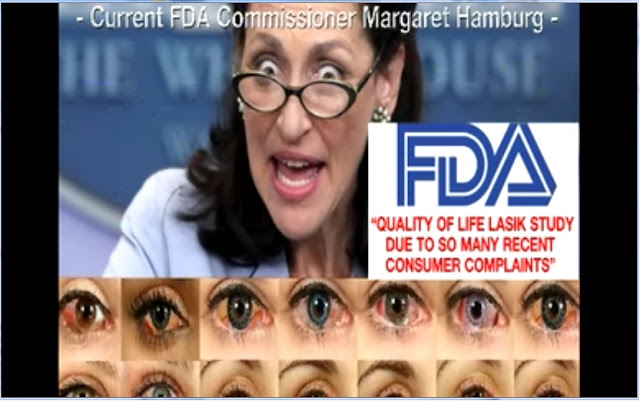 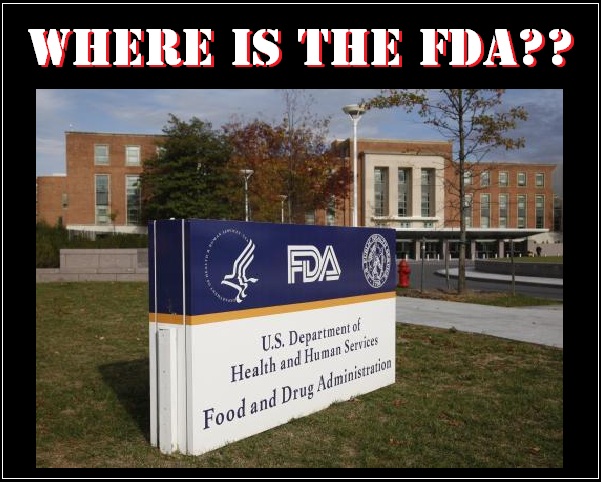