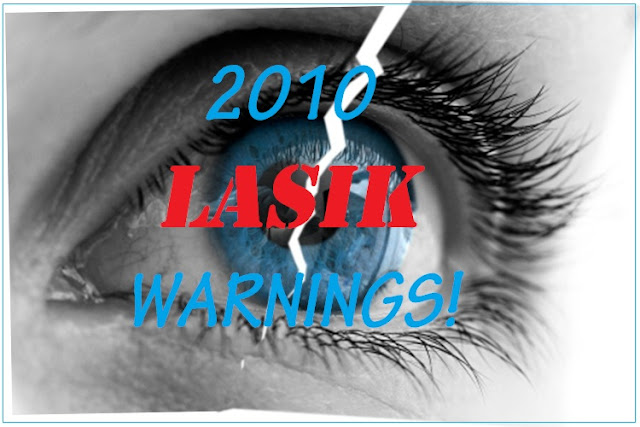 November 23rd, 2010:  Laser Eye Center of Hawaii LLC has filed for Chapter 11 bankruptcy reorganization after announcing last week that it would close at the end of the month:
http://www.staradvertiser.com/business/businessnews/20101123_laser_eye_center_of_hawaii_makes_filing_for_bankruptcy.html

September 11th, 2010:  Nevada disciplines LASIK surgeon, Dr. Stella Chou, for botched procedures:
"During the procedure I don't know what was going on, but at one point, the assistant was yelling at the doctor to stop! Stop!"
http://www.ktnv.com/Global/story.asp?S=13134892

September 6th, 2010:  ESCRS research shows that 80% of the public is scared of elective LASIK surgery and does NOT TRUST the Ophthalmic physicians "used car sales pitches" any longer:
http://optics.org/news/1/4/7

May 25th, 2010:  "Happy LASIK Patients Being Forced To Comment About LASIK
To Try To Keep Up With Unhappy LASIK Patient Reporting:"
http://www.regulations.gov/search/Regs/home.html#documentDetail?R=0900006480af2216

May 14th, 2010:  Hurt LASIK Patients File "Dissatisfaction and Adverse Events" on www.Regulations.gov begging for the FDA to listen and do something to prevent future harm to the public with "Elective Irreversible LASIK Surgery:"
http://www.regulations.gov/search/Regs/home.html#searchResults?Ne=11+8+8053+8098+8074+8066+8084+1&Ntt=lasik&Ntk=All&Ntx=mode+matchall&N=8099

May 10th, 2010:  Ex Chief of Medical Devices, Mr. Morris Waxler, PHD Warns "I am Morris Waxler, PHD, former FDA official in charge of approving laser vision correction (LASIK) devices between 1996-2000.  Thanks to pointed questioning by LASIK-injured patients, I have re-examined the data FDA used to approve LASIK devices as well as the data from subsequent scientific studies and now conclude that LASIK-induced risks of permanent loss of vision overwhelm the temporary benefit of visual acuity improvement.  Please warn members of your organization that LASIK causes: * The cornea to thin and bulge (keratectasia).  *At least 15-30% risk of complications including permanent eye pain, glare, halos, dry eyes, night vision and other problems.  *Only a 60% chance of temporary reduction in dependence on glasses or contact lenses.
http://www.lifeafterlasik.com/LASIK%20Morris%20Waxler%20May%202010%20Letter%20To%20Whom%20It%20Concerns.pdf

February 16th, 2010:  Diana Zuckerman, president of the National Research Center for Women & Families, said standards for deciding if a new device is equivalent to one already-approved are "too loose to assure safety or effectiveness...Our center regularly hears from patients and consumers who were harmed by LASIK & other products that were not adequately tested prior to being sold..."
http://www.reuters.com/article/idUSN1624745820100217

January 29th, 2020:  "Erik J. Rupard, a doctor and clinical researcher with the U.S. Army, is among those who think such scrutiny is necessary... "I saw lots of dry-eye complications in soldiers in Iraq who had undergone the procedure ostensibly because contacts are too unsafe in that dusty environment, and yet the Department of Defense has done no controlled studies to look at the cost
-- human and otherwise -- of these post-refractive issues."
http://www.salon.com/life/elective_surgery/index.html?story=/mwt/feature/2010/01/25/lasik_problems

January 26th, 2010:  “The public has now been informed of their ongoing incompetence, using words like ‘temporary side effects/symptoms,’ failure to submit mandatory Medwatch cases to FDA, instead of telling the patients the truth…’that you suffer from permanent complications/adverse events’ from this ‘elective procedure…
http://www.salon.com/life/feature/2010/01/25/lasik_problems/index.html .