"Just because permanently injured & depressed patients aren't on the top nightly news stations around the world doesn't mean they're not trying to warn you!"  Just take a look at dozens of websites set up by injured LASIK patients trying to warn you... 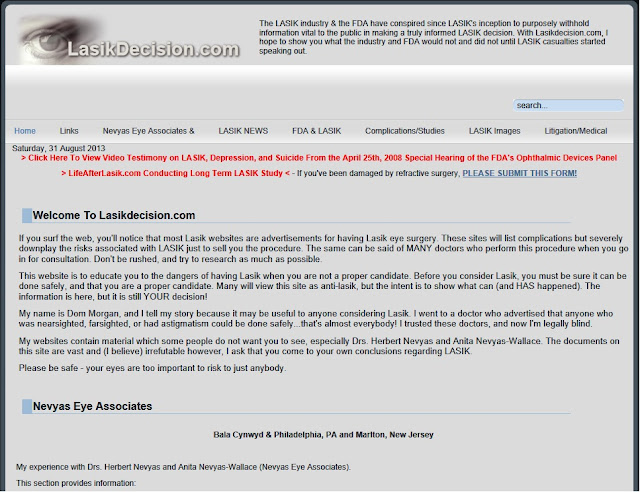 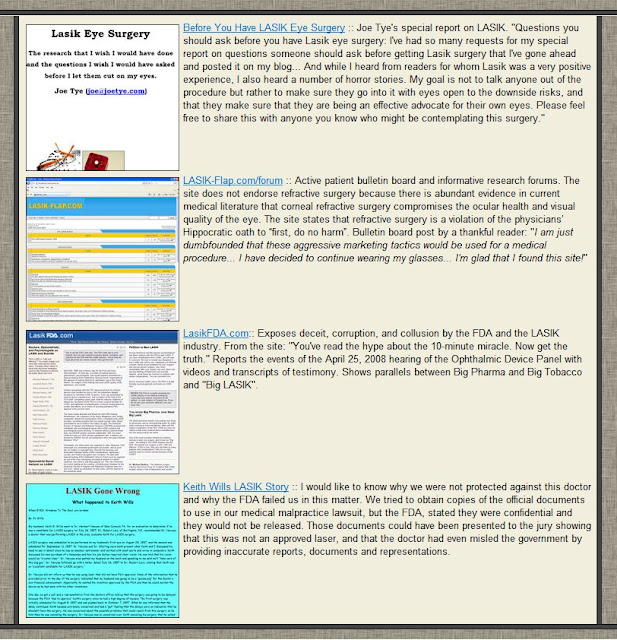 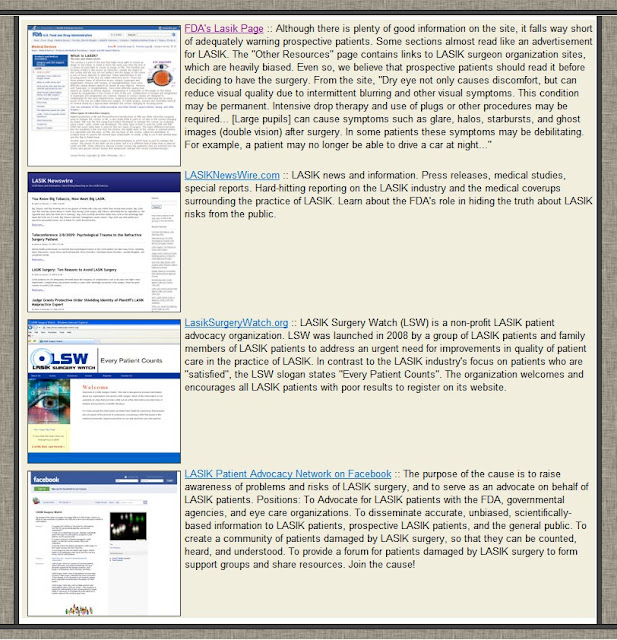 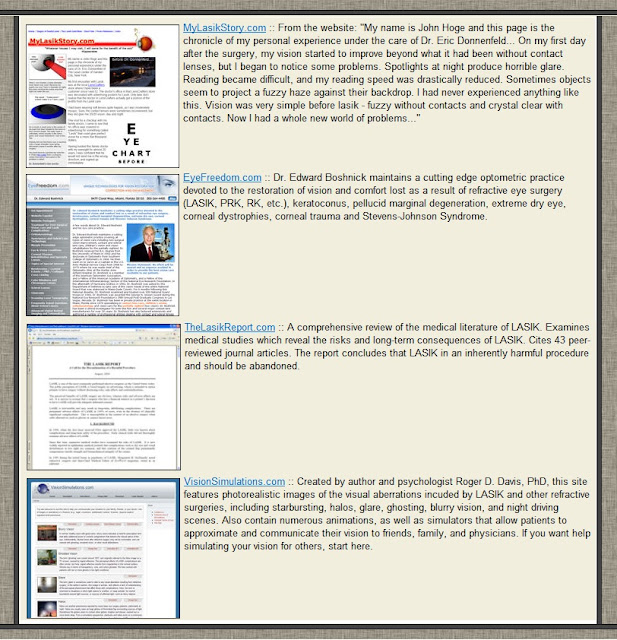 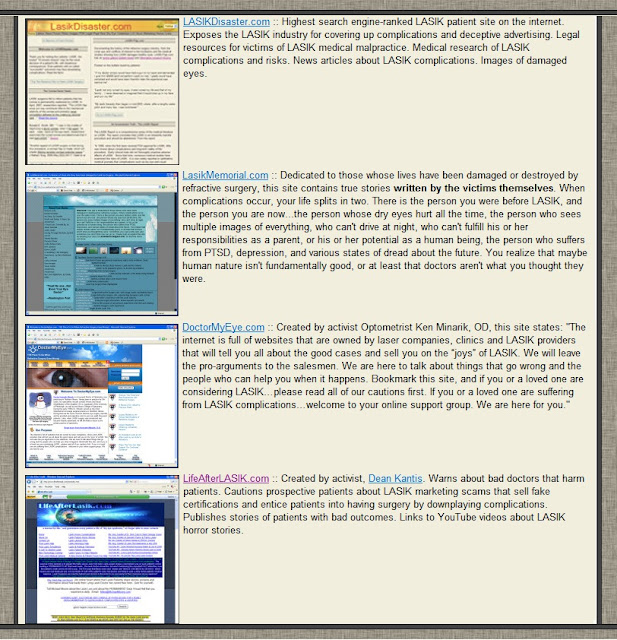 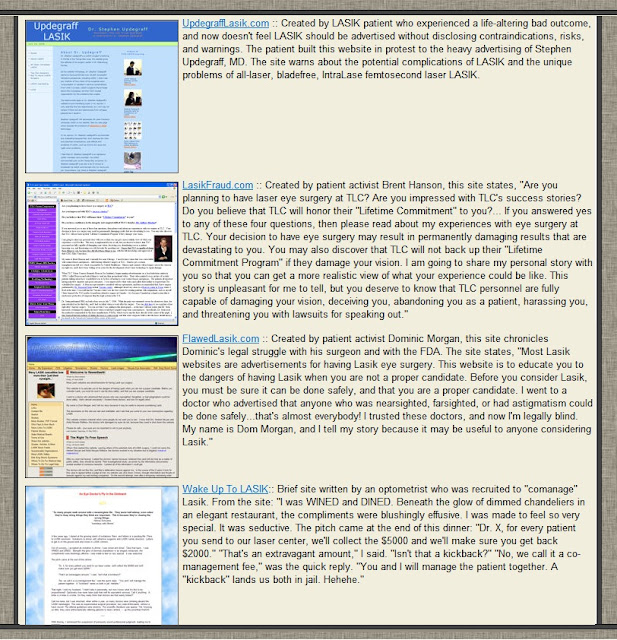 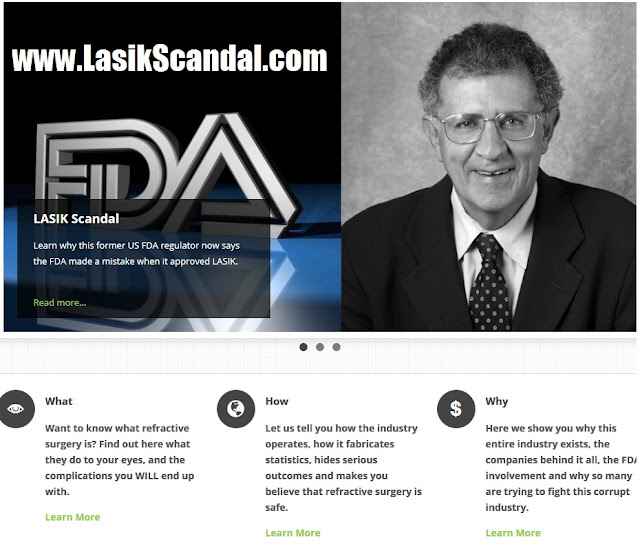 LASIK DOCTORS EVEN SUE THEIR OWN PATIENTS
THAT SPEAK OUT AGAINST THEM!
LASIK Case in Point:  Dean Andrew Kantis who operates the website www.LifeAfterLasik.com , in order to warn the public that LASIK is dangerous, is very profit-oriented, the Ex Chief of Medical Devices, Dr. Morris Waxler, whom approved LASIK is now AGAINST LASIK, and petitioned the FDA to end the procedure saying it causes a "healthy eye" to become "sick and diseased" and the cornea is permanently scarred and damaged for life!  Dean Kantis was sued by his own doctor for $2 million dollars, Nicholas Caro of Saint George Vision in Chicago, because of this page which exposes his doctor's evil / dark side...showing 50+ LASIK LAWSUITS and why his physician should be in jail...stating "MEDICAL CRIMES" and knowingly injuring his own patients:  www.LifeAfterLasik.com/nickcarolawsuits.htm .
Because of DeanKantis' persistent effort to win against evil, even being sued by his own doctor, the Chicago Tribune even persued this doctor because of Dean Kantis' effort(s) in seeing this through to the end.  Here is a recent article showing this LASIK DOCTOR and his wife, accused of (5) CRIMINAL INDICTMENTS:

﻿
﻿
If you review this page, near the bottom, you will see the lawsuit verdict.  However, even though Dean Kantis' LASIK doctor tried to shut his website down so no one else could see his lawsuits, Mr. Kantis won and his website still perpetuates and continues to warn everyone to stay clear of this dangerously-irrevesible procedure.
We'll leave you with this one thought:
"Can you find anything online where this amount of effort from those that were permanently injured by an elective procedure that they didn't need in the first place, were trying to warn you and look out for you?"